How a meticulous programmer can uncover the truth that Richard S. Sutton missed

Richard Sutton is a distinguished research scientist at DeepMind and a professor of computing science at the University of Alberta. He is considered one of the founding fathers of modern computational reinforcement learning. 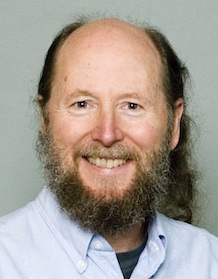 Sutton is also an excellent educator. His textbook Reinforcement Learning: An Introduction, fluid and having a good rythme, is one of my all time favorites. 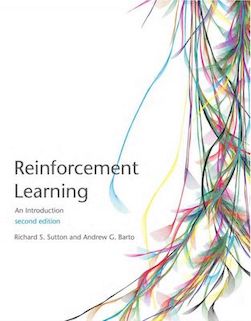 Recently, I am reading this book for the second time, and I found a thing that Sutton has neglected about the greedy algorithm (described in Chapter 2) for the bandit problem. In this post, I will present my discovery and provide extensive evidence and reasoning to support it. After you finish reading this post, I hope you to realize the critical role rigorous programming can play.

This post is organized as follows. First, I will present the bandit problem and the greedy approach to crack the problem. Then, I will explain how Sutton’s “clever” computational device ended with misguiding him and led him to believe something false. Finally, I will compare my implementation with the others’ as well as provide extensive experiment results to support my findings. This discovery is original, just like all my other posts.

The bandit problem is a classic one in reinforcement learning, and it is usually the first item taught. The bandit is actually a machine, which has a better-known name as the slot machine. 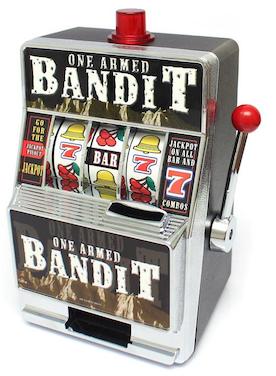 The machine shown above has only one arm, whereas the bandit machine in reinforcement learning has multiple arms, with each arm having a different reward distribution. For example, the following figure shows the reward distribution of a ten-armed bandit. 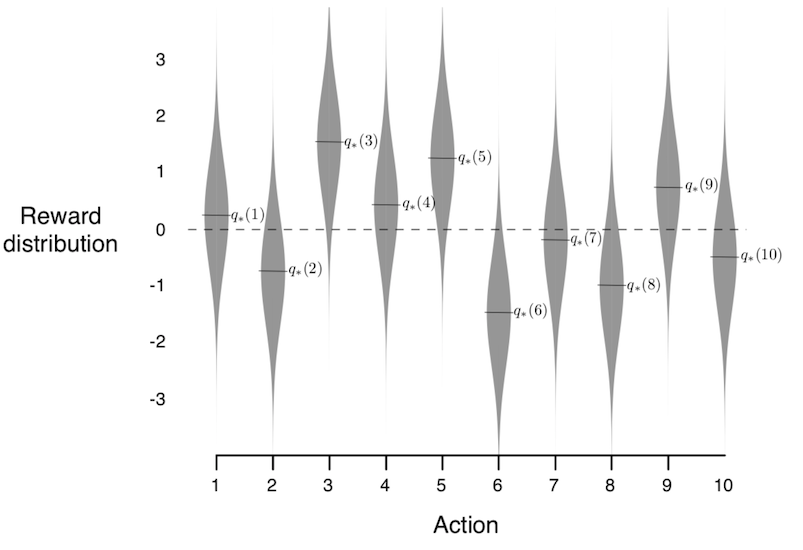 Obviously, the proprietor of the casino will not tell you the distribution. You have to find the optimal one yourself and find it as early as possible.

By the law of large number, the optimal arm is the one with the highest expectation. Therefore, the goal is to pull again and again the arms with high expectation. The higher, the better.

Also by the law of large number, the expectation of an arm can be estimated with the sample mean. That is, the accumulated reward on one arm divided by the total count of pulls on that arm gives an excellent estimation of the expectation.

The greedy algorithm consists of pulling the arm with currently the highest estimation. That is, [ A_t := \arg\max_a Q_t(a) ]

One problem with the greedy algorithm is that it is too rushy. If the optimal arm fails to behave well in its first pull, it will no longer be considered. ()

Thus, Sutton advocates the $\varepsilon$-greedy algorithm, which has a probability of $\varepsilon$ to deviate from the current best arm and pick an arm in random. In this way, the algorithm explores other arms, and the optimal arm may get a second chance.

Sutton’s experiment shows that the $\varepsilon$-greedy algorithms outperform the (pure) greedy algorithm, in both the average reward and the percentage of optimal arm pulled. 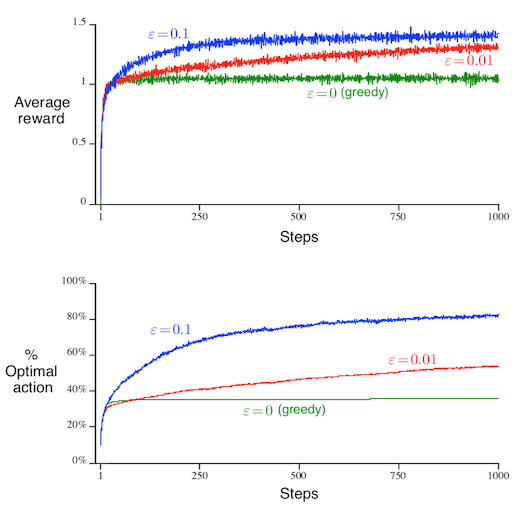 Later in this post, I will show you that Sutton’s conclusion is wrong. But before that, let me first introduce you to Sutton’s “clever” computational device.

Sutton’s efficient update of the estimation

The expectation of the estimation can be, naively, calculated from the accumulated reward and the count. Sutton, being a genius, would certainly avoid we commoners’ path and do something smart instead. Indeed, he updated the estimation from the past one in a recurrent manner: [ Q_t = Q_{t-1} + (R_t - Q_{t-1}) / t. ] In this way, he saved the memory as well as accelerated the computation. Moreover, since the initial accumulated reward and count are both zero, the above formulation avoids the 0/0 error by manually setting the initial estimation.

Sutton picked zero for the initial estimation. He did not give the reason, but I can understand what he was thinking.

Sutton launched the computation without a second thought, but let us analyze here the soundness of the above reasoning.

Q: Accumulated rewards start with zero, so it is natural to start the reward estimation with zero?

A: Both the accumulated reward and the count start with zero. Therefore, it is 0/0, which can be any number. Replacing an arbitrary number with zero does not sound right.

Q: Zero for the initial estimation matches a zero-information prior?

A: In Bayesian statistics, a constant prior does not give any privilege to any parameter value. However, it is true only for this parametrization. After a parameter transformation, a constant prior is no longer constant. Therefore, there is no real zero-information prior; every prior sneaks in some information. Similarly, assuming the initial estimation of expectation to be zero is just as informative as assuming it to be any other value.

In conclusion, the initial estimation is a parameter of the algorithm just like the parameter $\varepsilon$.

Sutton’s algorithm is one with two parameters instead of just one!

It is difficult to evaluate an algorithm with two parameters. With the interference of the initial estimation, we can hardly judge the effect of $\varepsilon$ alone. To proceed, I propose to replace the subjective initial estimation with an objective one, namely by trying each arm once in the first place.

The following figure shows my experiment result. The legend items can be clicked to filter the curves. Although the pure greedy algorithm does not identify the optimal arm as often as the $\varepsilon$ versions, it is still the best in terms of average reward. The explanation is that it can often find the second best arm, whereas the $\varepsilon$ versions often waste their time in trying random (and bad) arms.

This result will not change even though the variance of the reward of each arm gets larger. The reason is that the motivation to find the absolute optimal arm is even weaker since chances play a more important role than choices do. The following figure shows the experiment result with a standard variation of 5.

The code to generate these plots can be found on my GitHub.

This discovery would not be possible without my meticulous attitude toward programming. Just like I have always believed, rigorous and methodical programming can uncover truths .

In this regard, I might as well explain the advantages of my implementation over Zhang Shangtong’s.

For now, my repository is quite simple. I will probably add more items in the future depending on how soon I will find my next occupation. If you like my implementation, don’t hesitate to star and share it.

Sutton concluded the chapter with a parameter study (Figure 2.6 in his book). Here, I will do the same but with something more powerful.

Sutton noticed that it would be visually infeasible to present the temporal dimension with so many algorithms, so he presented the average reward across time instead, which is equivalent to the AUC (area under curve). Here, since we are on website, I can use animation to show the temporal dimension.

% of optimal pull across time

One thing of particular interest here is that all curves go up and down at the same rythme. This is because all algorithms work on the same bandit (with the same random number generator) in each simulation. A bad day for one algorithm is also a bad day for the others.

We can observe that the optimistic algorithm starts the fastest, and the gradient method starts slowly but later catchs up. All algorithms can achieve good results asymptotically.