The ebb and flow of Zhang Shaogang

Zhang Shaogang is a television presenter in China, not esteemed but definitely controversial. His highly aggressive presenting style is beloved by many and equally hated by many. He had his glory but also has undergone major career failures. This post will analyze the reason behind his ebb and flow and contrast it with western presenters with equal (if not more) aggressiveness. 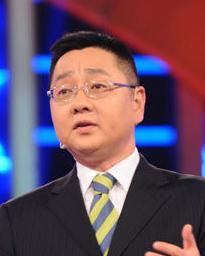 Zhang Shaogang is currently 48 years old. He made his debut as a television presenter in the programme Legal Report. This working experience could not be called a success, as he did not have much knowledge about laws and he failed to leave a strong impression on the audience. It is through another TV programme Fei Ni Mo Shu (my translation: the offer goes to you) that Zhang gained a reputation.

Fei Ni Mo Shu (hereafter FNMS) is a programme gathering job seekers and employers together. In each episode, a job seeker is brought to the stage and tries to win the favor among 12 employers by showcasing his knowledge, skills, experience, and determination. Zhang Shaogang served as an anchorman in this programme, whose role is to interact with both the job seekers and the employers and control the agenda of the programme. 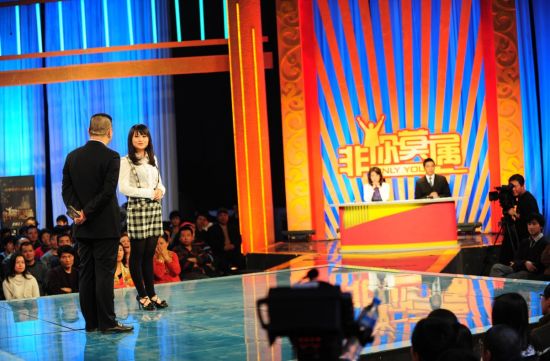 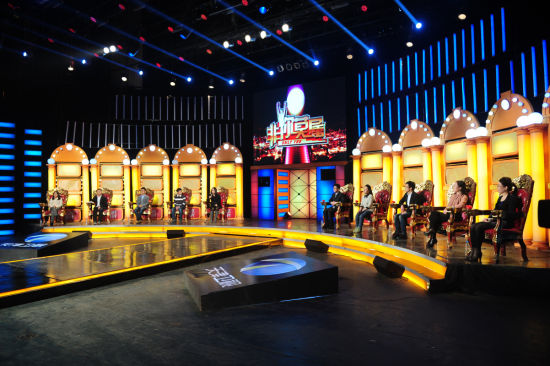 Zhang Shaogang got an excellent stage to showcase his knowledge, humor, and talent. It was as if the stage were centered around Zhang instead of the job seeker. The programme degenerated into a one-man show: rather than being a serving tool to help the job seekers and the hiring employers, it became more of an entertaining programme. It was surely amusing, and Zhang became a beloved performer of the Chinese audience. 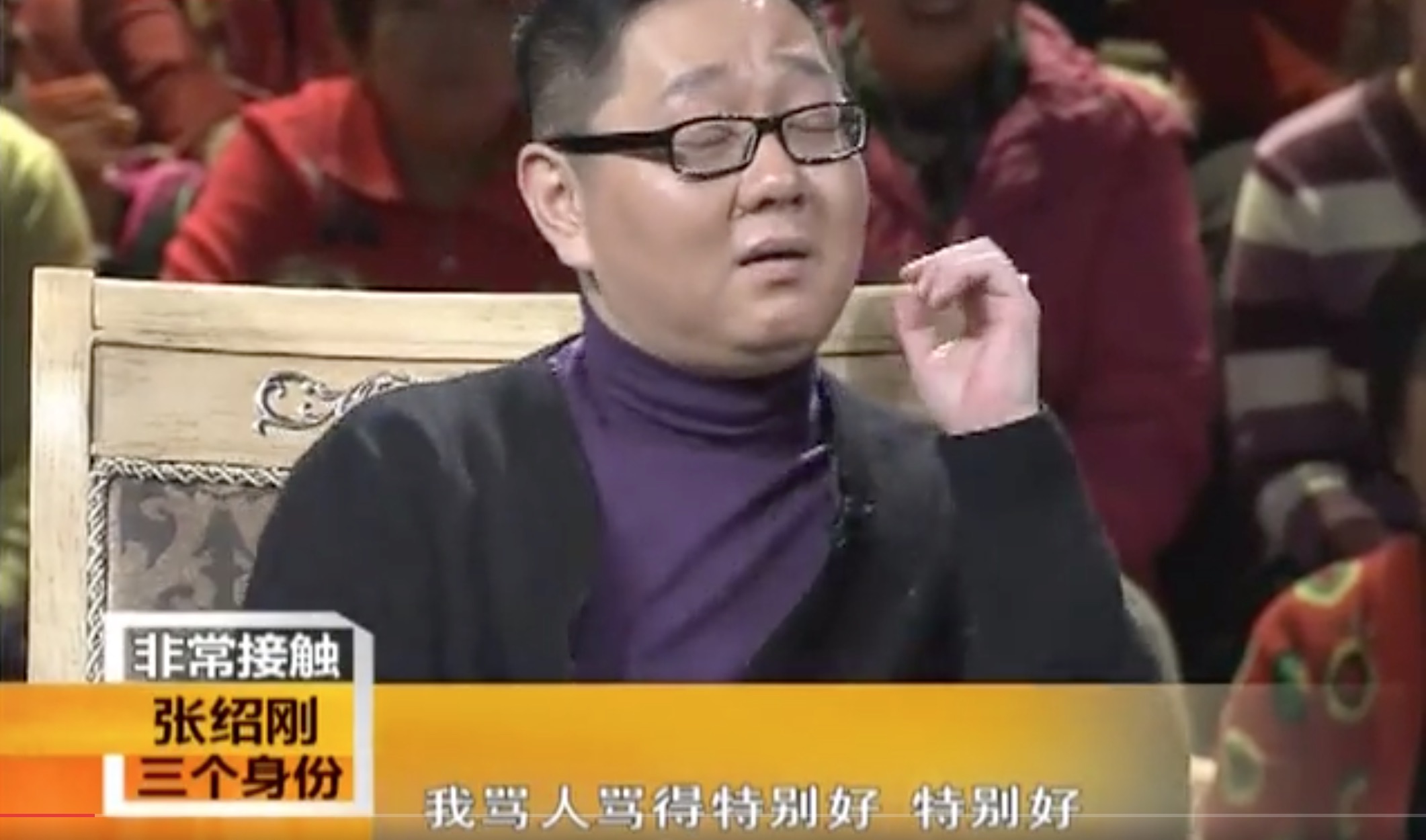 Zhang Shaogang got huge satisfaction from this stage of which he had absolute control. With the growing of satisfaction was his aggressiveness. In the episode with Liu Lili, a female job seeker with oversea education in New Zealand, he rudely attacked her for her reference to China as China, as is. Rather than mitigating the conflict, he proceeded with actively provoking the girl. In the episode with Guo Jie, a male job seeker with oversea education in France, he rudely mocked him and resulted in the latter’s faint. Even so, Zhang refused to help him to get up and, instead, continued his abusive behavior. 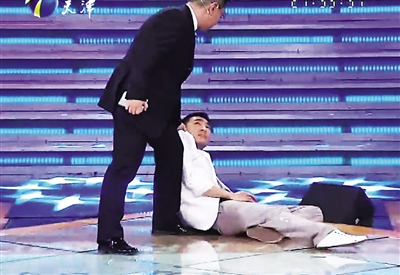 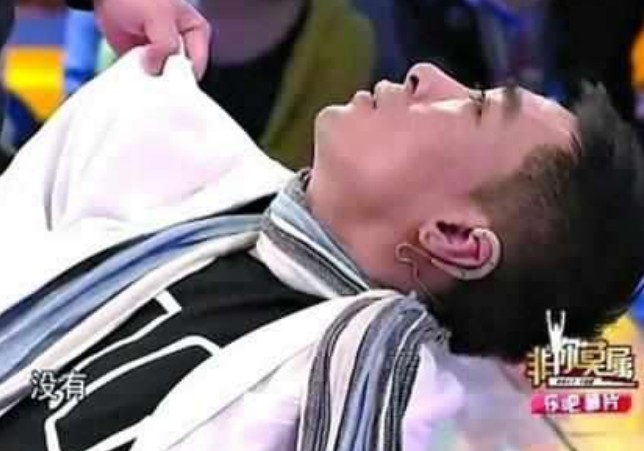 After these episodes, Zhang Shaogang was widely criticized for his lack of sympathy. Some people called him “evil tongue.” Jin Xing, a female Chinese celebrity, referred to FNMS as “the abuse goes to you (my translation).” Lee Kai-Fu, a famous Chinese businessman, called for the boycott of FNMS. Zhang’s public image plummeted. He was forced, in 2013, to leave the career of television presenters.

But why sympathy, lack of which resulted in Zhang’s downfall, is regarded as a necessary quality for presenters? It is worth noting that many western presenters lack sympathy, but it has never become a problem for them. To answer this question, let us temporally deviate from Zhang Shaogang and focus instead on western presenters.

Tim Sebastian is a television journalist. He interviews public figures and is known for his aggressiveness. The following is the excerpt of his interview with Wolfgang Schüssel, a political figure, when Tim was working for BBC HARDtalk. 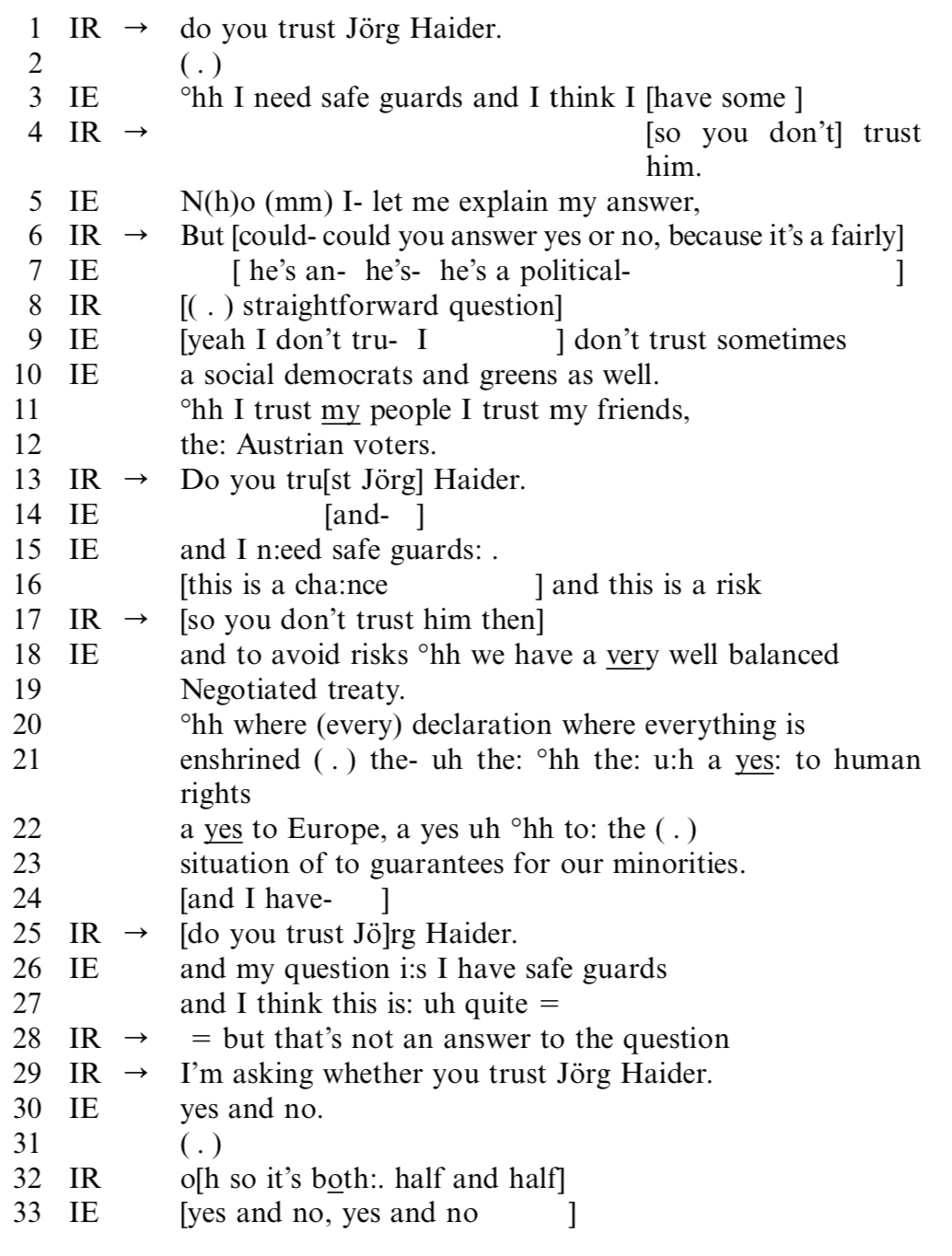 The conversation concerns Jorg Haider, a questionable political figure at that time. Tim asked a yes/no polar question, which severely limited Wolfgang’s answering choices: The latter had to either declare his commitment to Jorg or drew a line between Jorg and himself. Neither choice was ideal, and both had damaging consequences to Wolfgang. Thus, Wolfgang tried to make some non-committal answers. Nevertheless, Tim just did not let him go by persisting with the same question (indicated by the arrows). Tim asked the same question 8 times!

Tim’s interview style cannot be called friendly. Nonetheless, his aggressive style was beloved by the audience and won him the British Academy of Film and Television Arts Richard Dimbleby Award in 1981 and Britain’s prestigious Royal Television Society Interviewer of the Year award in 2000 and 2001.

Tim never leaves the screen. He has interviewed, among others, Bill Clinton, Donald Trump, and Singapore’s first Prime Minister Lee Kuan Yew. He is currently the moderator of Conflict Zone and The New Arab Debates, broadcast on Deutsche Welle.

In Zhang’s case, the interviewees are job seekers, who are in a weak position and evoke people’s sympathy. Even western news interviewers show sympathy to those who have suffered from unfairness. For example, Tim Sebastian’s successor, Stephen Sackur, who is hated by the Chinese government because of his aggressiveness on the issues of COVID-19 and Hong Kong’s National Security Law, showed remarkable sympathy when he was interviewing Mia Khalifa, a one-time No. 1 adult actress, while acknowledging her victim status.

In Tim’s case, the interviewees are public or political figures, who are in a strong position. They are either rich or powerful or both. In western democratic countries, public figures are held accountable for their decisions and actions. Especially for political figures, their power should be limited and carefully monitored. Edward Jay Epstein (not that sex offender) put it well:

The working hypothesis almost universally shared among correspondents is that politicians are suspect; their public images probably false, their public statements disingenuous, their moral pronouncements hypocritical, their motives self-serving, and their promises ephemeral.

Journalism is an important component for democracy; it serves as the “watchdog” of democracy. In particular, in news interviews, the interviewers go one step further: they become the “attack dog”.

Therefore, news interviewers’ aggressiveness is not only understandable but also highly appreciated. Many interviewers known for their aggressive style, such as Mike Wallace (the one who interviewed the Chinese leaders Deng Xiaoping and Jiang Zemin), Dan Rather, Sam Donaldson in the US and Robin Day, David Frost, Jeremy Paxman in the UK, have gained celebrity and become equal in fame to the ones they interviewed. There is a real career in following this path. 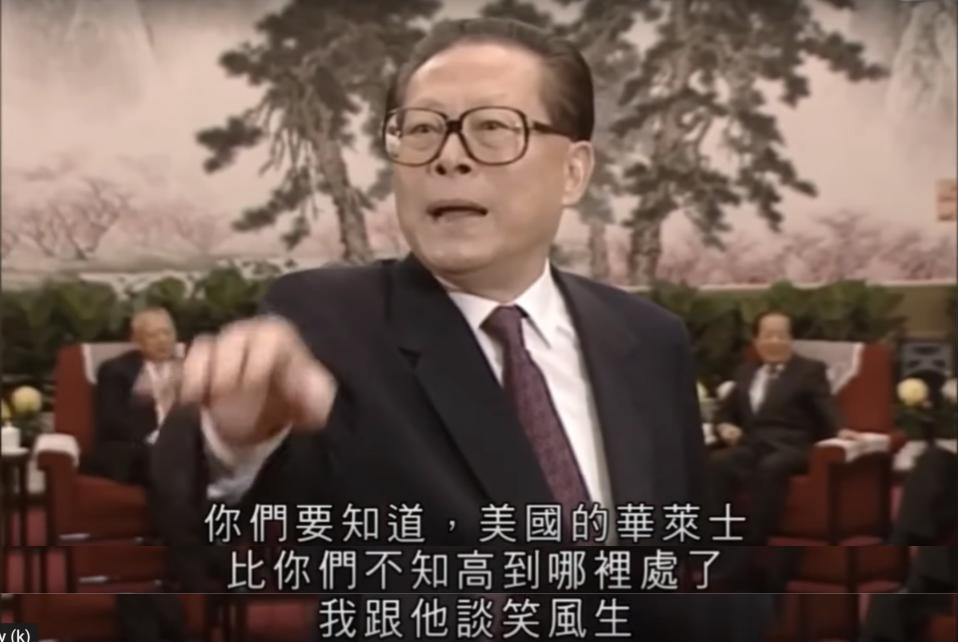 In China, journalism, or more generally the media, is supposed to be the mouthpiece, soapbox, and lapdog for the Party. The Party is supposed to be always great, always glorious, and always correct, and it can by no means be challenged.

Zhang’s talent is useless here, just like Ant Group, Didi, and other private corporates axed recently. To put his talent to use, he resorted to job seekers, who are vulnerable, pitiful, and indefensible. His misplaced talent and evil tongue slashed the career prospects of many job seekers. He is not that different from those criminals seeking revenge by killing innocent primary school students.

In 2016, Zhang Shaogang came back to the screen and is now the presenter of the Chinese talk show Roast!. Here, Zhang finally found a place where his aggressiveness can shine. And the target to roast is no longer job seekers, but other celebrities, such as film stars.

Zhang has also changed a lot. He overtly claimed that he did not like verbally offending others or being verbally offended either. In the talk show, he also showed that he has been starting to master some self-depreciation humor. 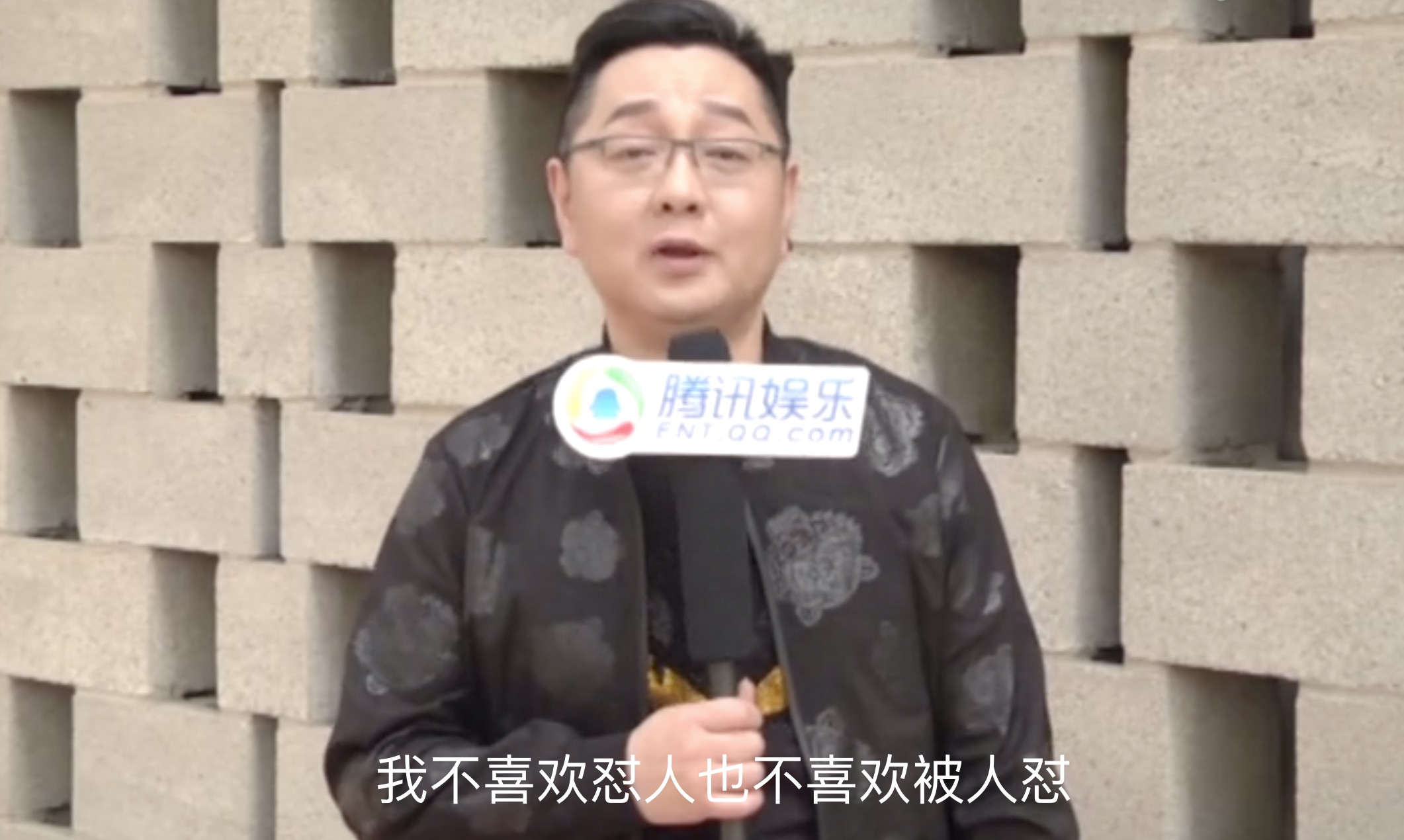